Tonight's Episode: May I have the pork, with a side of pork

There are some restaurants that seem to exist outside of time. Walking through the door takes you back decades, often to a simpler time. When you share a common history, the simple act of picking up a fork may take your emotions on a wild ride through time and space. For some it dredges up fond memories of work on the weekends for cash, large tables of friends and family, and a view of the world outside that you would be entering someday soon. For others, it might force you to remember the reasons you wanted to leave home as fast as possible. Time may mellow some feelings or sharpen others to a razor's edge, but the restaurant doesn't care. Sometimes you have to bury your feelings, pick up a plate, and go back in time.
The Girl, her parents, and yours truly decided to take our dinner out in Ridgeville at the restaurant that was once the symbol of why I wanted to leave the South. Duke's BBQ has always seemed to have been there.  Situated just across the railroad tracks in a town slowly fading out of existence, Duke's still draws the weekend crowd from miles in every direction. This is the classic cafeteria style BBQ joint that at one time was in every town in the state. In the fall, expect to be sitting shoulder to shoulder with friends you've never met debating which local high school has the best shot at the state title. I'm almost certain every movie set in a small southern town has a scene filmed at Duke's.
Well, that's two paragraphs, and we haven't even walked through the door. I warned you I had mixed feelings about eating here. You step through the door and the inside is almost as shabby and depressing as Ridgeville itself. Everything seems to be a shade of yellow. The walls are some kind of yellow. The table is some kind of yellow. The tea urns that are as old as my soon to be in-laws are some kind of yellow.  I wouldn't fault you for turning around and walking out at this point. Only when you look close do you see past the depressing and see the resilience of the South. There is a smile on everyone's face. A wave and a head nod quickly turn into handshakes and hugs. Simple tasks are conquered with a whistle and a song. Time may have passed Duke's by, but that doesn't mean you can't stop and smell the hash.
That hash is the first thing to hit your nose. Not the pulled pork, not the fried chicken. The liquid BBQ just hangs in the air. As you get closer to the self-serve bar, you see more of the classics. Pulled pork, BBQ beans, rice for your hash, fried corn bites, hush puppies, and a range of veggies from rutabega to green beans. Remember, your $7.50 is for all you can eat; you don't have to load up on your first trip. 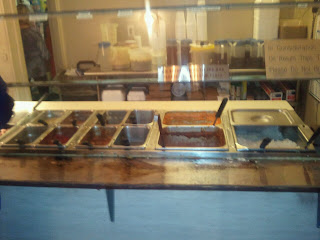 After you fill your plate, you have three choices in beverage: sweet tea, unsweet tea, and something pink. (The Girl assures me it's pink lemonade.) Pull the 30 year old tap on some sweet tea and pray that all that sugar killed anything that might be growing in there. Next to the drink station are three pumps and a bottle of sauce. The bottle is a spicy vinegar that I love. In the pumps are Red, Sweet Red, and the evil God-awful mustard based sauce. I'm not sure if mustard sauce or Mark Sanford make me more embarrassed to be a South Carolinian. I prefer a mixture of the vinegar and Red. 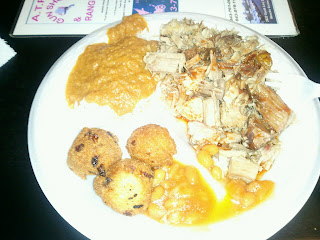 Sitting down at a table with my first styrofoam plate full, I begin to plan my attack. The colors meld together into a brownish-yellow blob, but the smell is heavenly. Starting with the BBQ beans, they are rich and hearty with a nice smoke note. The rice and hash are liquid gold, again with a smoky note but also a rich pork flavor. The pulled pork itself is good, though I have had better. The lack of burnt ends (the outside edge of the pig that gets nice and crispy in the smoker) is a letdown. The real star of my first plate are the hush puppies. These little nuggets are fried wonderfully crisp without being greasy. The same can not be said about the fried chicken. Mr. Robert is normally on the cast iron pan manning the chicken. Tonight, he wasn't, and it was obvious. Unseasoned and greasy, overall just not that pleasant. After a second plate, I turned to the banana pudding with nilla wafers. Oh, that is delicious.
Relaxing after the meal I look around me. Duke's hasn't changed at all in the more than a decade since The Girl took me there on one of our first dates. So much about who I am and what I believe has changed, evolved, grown. I thought coming back I would look down on the simplistic food in the run down restaurant. Sitting there, staring at my last bite of pudding, I'm glad I came back. Authentic food from an America that is slowly dying. Go while you still can.

Posted by foodmancing at 8:18 PM No comments: Links to this post

Sunday mornings in Charleston can be summed up in two words: bottomless mimosas! I have counted no less than a dozen restaurants offering this brunch special. Our house guest for the weekend, Kentucky Fried Muffy, decided to organize an outing to one such downtown location. That is how we found ourselves at Toast, ten strong, drinking mimosas on the sidewalk while waiting for a table.
My first piece of advice is not to show up with 10 people. If for some reason that isn't an option, try to avoid the South Eastern Wildlife Expo as the weekend you bring the aforementioned 10 people. Toast is far from a spacious setting, though the hour and a half wait was made bearable with flowing mimosas. The restaurant itself is very home kitchen in style, very welcoming, and staffed by incredibly friendly waitresses. This welcoming atmosphere helps when our party of ten becomes two tables of five.
To keep this post from stretching on a week, I'll focus on four dishes. First up is The Girl's sorority Big Sister, Army Wives Season 3. She went with the build your own omelet with home fries and a biscuit ($9.00). With your choice of three toppings, this massive fluffy pillow of an omelet is both light and filling at the same time. The home fries are some of the best I've ever had, crisp without being over cooked, and without any mush. 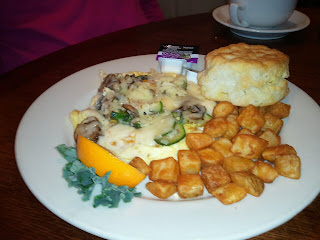 Another friend, the Svelte Fox himself, stole my original order and went with the Philly Breakfast Sandwich with home fries ($7.99). Served on thick cut toast, this is what Rocky eats for breakfast when he is tired of raw eggs. Steak, scrambled eggs, and cheese give you the type of hearty sandwich that you would never see at the Golden Arches. The steak is well seasoned and juicy, and the eggs are a beautiful soft scrambled. I am craving one as I write this. 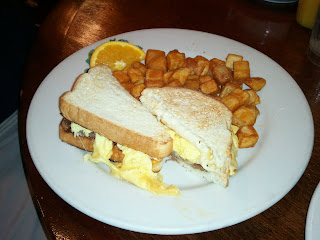 The Girl, who has no voice and is communicating solely through text message, settles in on the Traditional French Toast, served with your choice of bacon, sausage, or country ham ($6.50).  This plate is a good size if your only somewhat hungry, though after an hour and a half wait I found it a little lacking. Two pieces of toast and one large sausage sit on the sugar dusted plate. The french toast was very tasty, and the sausage was mild and satisfying. I just wish there was more of it. 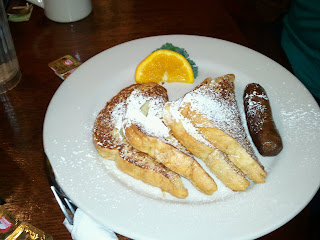 After loosing out on the Philly Sandwich, I quickly settled in on the most expensive item on the menu, the Eggs Meeting Street ($8.99 for the single, $11.99 for the double).  This tower of southern breakfast charm starts with a foundation of two fried green tomatoes, each topped by a crab cake, a poached egg, and Lowcountry remoulade sauce. The fried green tomato is crisp with a touch of pepper spice and beautifully green. The crab cake, as with most in South Carolina, is made of shredded crab and a lot of breading. Even though I hesitate to call these crab cakes (my position on lump versus shredded crab is well known), they are still rather tasty. The poached egg is what brings this dish together. Nothing says love like a runny yolk. The Lowcountry remoulade was nice, though over reduced and slightly salty. 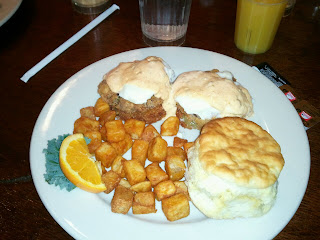 Toast is a wonderful Brunch destination, if you remember to leave the baseball team at home. The menu has some great diversity and is filled with fresh wonderful food. Looking though the lunch and dinner menu, I think we will have to come back soon. Who knows, maybe The Girl will be able to order for herself next time.

Posted by foodmancing at 2:02 PM No comments: Links to this post