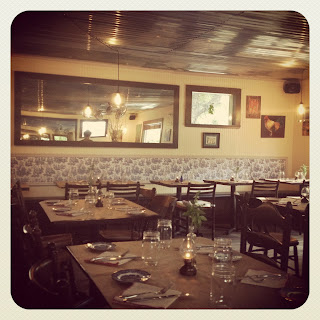 We were lucky enough to be invited to the Media Dinner for the new Angel Oak Restaurant, brainchild of Mississippi native and Culinary Institute of America graduate Jay Kees, and his lovely wife (and proud New Yorker) Nicole. Located just past Main Road on Hwy 17 South, the restaurant is in a charming house with a decor that highlights all the great things you can find in an attic, or on Craig's List. They will be focusing on local ingredients and blending New Southern with some Big City technique. During lunch they will feature a buffet for $8.95 (with tea). They will also be doing brunch (which we will be trying this coming week).

We started with a cocktail hour of three tastings. First was a cornbread muffin with bacon that had a great taste, and is normally served to order. Having sat a little it had become somewhat dry. Next was a sesame crusted tuna that was slightly spicy and tasty. The star, though, were the deviled eggs. I LOATHE deviled eggs, and The Girl isn't a fan either. These were so smooth and creamy, so incredibly mousse like.  The white of the egg was perfectly cooked. Superb!

To start the dinner we were given four appetizers. The first was delightful pork belly steam buns with pickled onion ($6). These are a must-order if available. 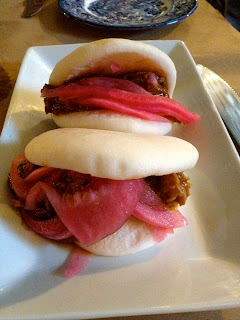 I really wanted to like the Port Wine Paté ($8), served with green tomato chow-chow, and those insanely good pickled onions. I desperately wanted to like it. The platting (on a slate dish) was fantastic, the accouterments were fantastic. I just couldn't get past the sweetness, and the way it plays off the gaminess of the liver. I ate half the dish trying to figure out just what I would change, and I am still lost. 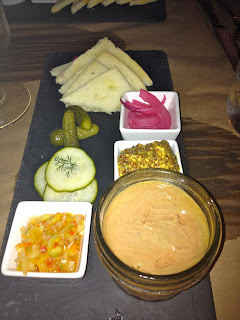 The house made Ricotta, with honey and toast, was delicious, a perfect example of joy in simplicity. 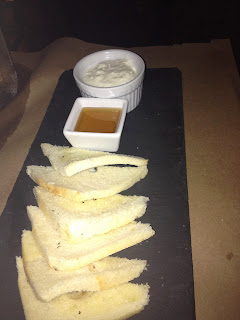 The fourth app was Buffalo Fried Hickory Smoked Bacon ($6) with Blu Cheese. In this dish we find an example of the need to think through your menu for a large seating dinner. The flavor profile was there, with the heat of the buffalo sauce playing off the bacon beautifully, but with the dish sitting for a while before going out the breading became soggy, and the bacon became limp, leaving a dish muddled in mushiness. I would like to try it again as a made-to-order dish, because the flavors were there. 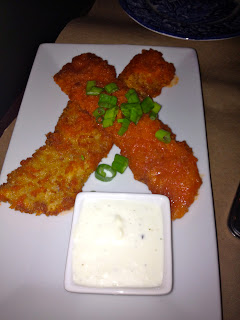 For my entree, I settled into the Country Fried Steak ($16) with herbed sawmill gravy, smashed potatoes, and I swapped my white corn on the cob (which was sweet and delicious) for The Girl's collards. The smashed potatoes were very good, and once I hit the collards with the house made pepper vinegar, they were fantastic. The steak itself was delicious, with beautiful flavor, but lacked salt to round it out. 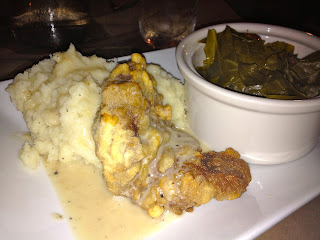 The Girl went with the Buttermilk Fried Chicken ($17) with mac 'n cheese and the collards that I swapped out. The mac 'n cheese needed more salt in the water as well, but still had a great flavor. But then you turn to the five-spice honey drizzled chicken. The clouds part, the sun shines, the angels sing. THIS is the way fried chicken should taste. As I type this I am licking my fingers clean from the leftovers. The skin-PERFECT. The moistness-PERFECT. The portion-HUGE. This is the dish that will establish Angel Oak's reputation. 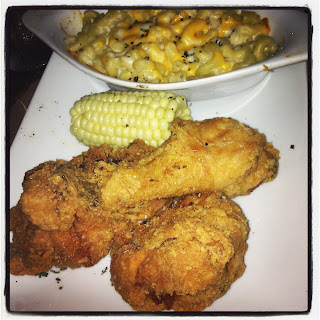 With dessert you must get coffee, the delicious, wonderful coffee with fresh cream. I went with the creme brûlée, while the girl chose the beignets, and both were solid renditions. Also available was the banana pudding served in delightful mason jars. 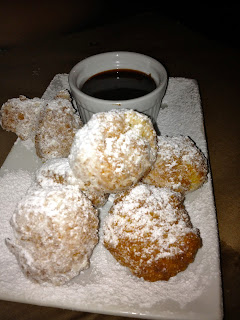 As with any new restaurant there are growing pains, and this is the first week of being open. The miscues I think are easily fixable, and Chef Jay spent time asking what worked and what didn't. The overall meal was actually very pleasing, and we are both excited to give brunch a shot. And to bring home some more of that chicken. Fresh ingredients show through on every dish!