Tonight's Episode: Dr. Sproutlove, or How I Stopped Worrying and Learned to Love Brussels Sprouts

Admit it, you hate brussels sprouts. I hated them. My dog hated them. I know this because she wouldn't eat mine. I have had a conversion, however. I now LOVE the little green orbs of yuck and have a favorite joint to gobble them up by the bowl full. I'm sure I've lost most of my readers by now, but keep an open mind. Maybe you'll learn to love them, too.
Let's define why we hate brussels sprouts. As kids, our mothers threw handfuls of the evil mini-cabbages into boiling water and let them cook until mushy. The result was a sulfurous boggy ball that offends multiple senses, with the stench, the bitter taste, and the gummy texture. The overcooking releases a glucosinolate that provides the bitter taste and smell. The overcooking has another unintended side effect, stripping the sprouts of their anti-cancer properties. That's right. Brussels sprouts help prevent cancer. They also help you become super-human strong. Remember Jean-Claude van Damme? Most people mistakenly think he was called "The Muscles from Brussels" because he was Belgian. Nope, the man ate sprouts like Popeye in a bar fight.
So how did I go from cursing my ungrateful dog for not destroying the evidence to being a die-hard sprouthead? The first taste of a good sprout came from the cookbook of my least favorite TV food personality, Ina Garten (http://www.foodnetwork.com/recipes/ina-garten/roasted-brussels-sprouts-recipe2/index.html). At the bottom of the recipe she says "I like these salty like French Fries." That caught my attention, and I decided to cook them up. Belissimo! From her recipe I expanded, first by quartering the sprouts to brown more completely, to adding bacon and a balsamic drizzle. Salt is a must though, plenty of Kosher salt. There are several other sprout recipes that I have found that I truly enjoy, including Alton Brown's (http://www.foodnetwork.com/recipes/alton-brown/brussels-sprouts-with-pecans-and-cranberries-recipe/index.html) and even Brussels sprout soup! (http://www.squidoo.com/brussels-sprouts)
Okay, we have home cooked sprouts down, how about restaurants? There are a couple of fine dining spots that have pretty darn good sprouts. Oak would be one, of course (http://www.oaksteakhouserestaurant.com/index.html). They don't have the best, though. For my money the best Brussels sprouts belong to a chain restaurant. That's right, a chain; although it is a local chain. Tbonz (http://www.tbonz.com/), whose sister restaurants include Pearlz and Kaminsky's, has been around for years. I, however, have never been much of a fan. That would be courtesy of the Market Street location, which is priced perfectly to draw in the tourists by the busload. So for several years, Tbonz has been on my 'why bother' list.
That all changed when I received a coupon this past December. Being the thrifty Scot I am, I grabbed The Girl, and off to the West Ashley location we went. I'm not going to go in depth about most of the food. The steaks are on par with Outback, and well ahead of Applebee's. Good, filling, inexpensive. The rack of ribs are Titanic in scale, and priced on par with the much smaller portions at Chili's. None of that matters. None of that is why I come back. I come back for the service and the Brussels sprouts.
The preparation of the sprouts is amazingly simple. Halved, flash fried for 30-45 seconds with parmesan cheese and Old Bay, and on the plate. THAT IS IT! Boy does it taste like more work. The nutty parmesan and the slight bitter of the sprouts blend seamlessly. The Old Bay is subtle, so much that until you know it is there you can't place the taste. Once you realize that fact, you realize these aren't Brussels sprouts, they are Crab sprouts! The similarities in taste to Maryland blue crabs is uncanny. This one dish is a must have for anyone who loves, or hates, these much maligned veggies.
Every other week for several months we have been stopping in, mostly so I could have sprouts. Then on Easter Sunday, the 6th Day of Passover, our waiter Ben nearly ruined my world. He told me that they were planning on taking the Brussels sprouts off the menu. I know they are a winter veg, and in spring and summer they can be much smaller, but they are so damn good! Apparently my shock was so visible that Ben went to his GM, Rob, and told him about my dismay.
I want to stress the fact that at this time no one knew who I was, or that I write this blog. To Rob I was just one more face that passes through his restaurant, one of hundreds he sees every week. He asked me if it was true that the sprouts were the reason I keep coming back. 'Of course they are, they are perfect!' I tell him. His next sentence won me over as a customer for life. "Well, I guess we will just have to keep them on the menu then." One person wanted to keep them. One person he has never met. One person who might never tell another soul about the generous move on his part. Can you imagine the GM at Outback doing this? Tbonz may be a chain, but it is a local one, with a local focus, and a real focus on the guest experience!
So there you have it. In one post I have been able to show you that my outlook on a childhood arch-nemisis and a poorly thought of restaurant have changed over the course of time, with the help of proper preparation and great service. What other foods and restaurants have I ignored all these years that might actually be good? How about you, what are you going back and trying again?

Posted by foodmancing at 10:34 PM 2 comments: Links to this post

Tune into the Travel Channel or Food Network, and if you're lucky, they might have a trip to Charleston for you to enjoy. It doesn't matter what show, what host, what schtick they are doing, there is one stop that seems inevitable. At some point the host will be in front of that venerable restaurant on the corner of Rutledge and Cannon, Hominy Grill. Just once I would love it if that celeb chef, home grown cook, or whatever vacuum headed mouth-piece with a microphone is talking would take the time to turn around and point the camera at the old filling station across the street. Inside is the Caribbean inspired restaurant known as Fuel Cantina.
The 50's era fueling station facade is complimented inside with a blend of classic filling station signage and equipment. The space itself is small but has a large outside area. Depending on the time of day you arrive, the bar/dining area can be VERY loud, so don't expect a quiet evening. 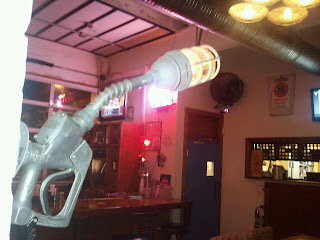 For starters we began with the anguillan beef kabobs ($6.50). These turned out to be three medium sized tenders of beautifully grilled beef, served with a cilantro mojo. While I would have loved a spicy sauce to go with the kabobs, they were very satisfying. As a second app, we went with the chips and queso carne ($6.50), which is a blend of fried and grilled soft tortillas with a house made chorizo queso. While the flavor was fantastic and the grilled soft tortillas especially so, the portion size is rather small considering the price. 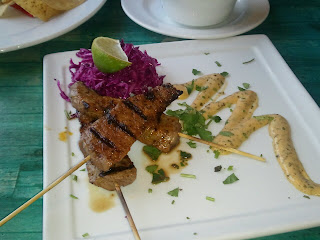 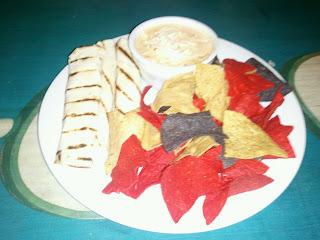 For a main The Girl decided on the BBQ buffalo burger ($13.95) with grilled bison, a mango ketchup, and french fries. I went another direction, choosing the House made chorizo burger ($13.95) with green chili horseradish aioli, smoked tomato ketchup, and shoestring potatoes, served with plantain fritters. Her burger was juicy and smoky, the mango ketchup adding just the right hint of sweetness. The chorizo burger was a damn good burger. The fat and hint of spice just give you an incredible mouthful, bite after bite. The size and heft of these burgers lessen the pain of the price tag and leave you feeling full. Not too full for those plantain fritters, though. Those were heavenly, especially the end bits. These are halved plantains deep fried to give a nice crunch with their banana like sweetness. I could polish off an entire plate in three minutes flat. 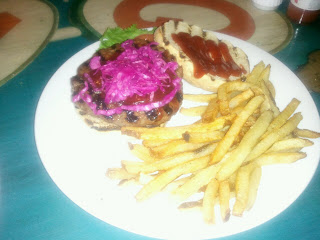 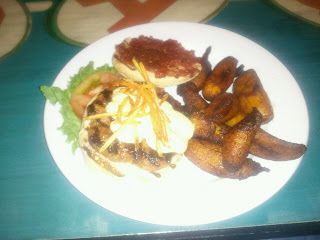 The other reason I like Fuel as much as I do is the outdoor patio area. Come in, order a mojito, and enjoy a beautiful outdoor area. The crowd you will find there is very reflective of a transitional area, college kids and older families, all enjoying service from a young and energetic staff.
I wouldn't say everything is perfect at Fuel. The service, while friendly, can be slow. If you come in too late at night, especially on the weekend, the place will be filled with college kids - loud, drunk college kids. I can not stress enough that inside can be VERY loud. The final complaint would be the rather limited parking. I have a great secret fix for that, but I can't tell you. Wouldn't be a secret anymore.
Overall I have to say I have enjoyed my trips to Fuel. The relaxed atmosphere, good drinks, and great food more than compensate for any negatives. As the days get warmer, why not consider a trip to the Caribbean?

Posted by foodmancing at 11:10 PM No comments: Links to this post