When it comes to honeymoons, what pops into your head? All inclusive resorts in the Caribbean? Mai-Tais in Waikiki? For the Girl and I, it had to be touring 3000 year old Grecian temples. Well, that and laying on a beach in Crete.
My first piece of advice on going to Greece is to remember that even though they invented democracy, standing in line is beyond them. From the flight over to getting into the many ancient ruins, chances are you will have to employ some bump and squeeze to get to your destination. This is also the way the Greeks drive. Be prepared. 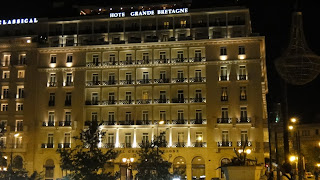 This would be our hotel, the Grande Bretagne. If you want to sleep in gilded age luxury, this is the spot. Rooms with marble floors and chandeliers, a roof top restaurant with a view of the Acropolis, stunning views of Syntagma (Constitution Square), and one of the best restaurants in the city. My advice is to try and score an upgrade to the 6th floor, which comes with butler service and all the exterior rooms have balconies. 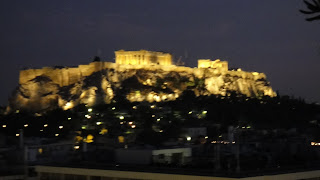 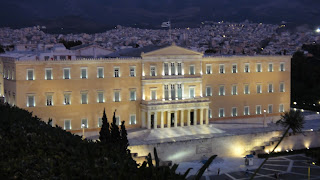 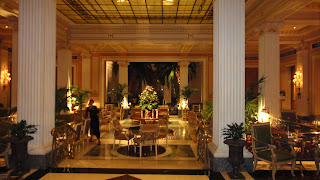 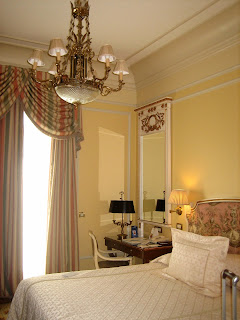 The roof top bar, where breakfast is also served, is a great place to start the evening. At dusk they light the Acropolis, first in green and then white. The drink menu is filled with the classics, including one of the best old fashioneds I have ever had. They also do feature drinks such as a creme brûlée martini and a mint julep. Visit, have one well-made expensive drink, then head out to the city. 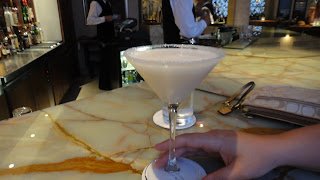 Before I get into some of the food we had, let me give you a little advice. Don't eat lunch before 2pm. That will allow you to eat dinner at the proper time, between 10pm and midnight. If you eat any earlier you will stand out like a sore thumb and miss the fun and vibrance of the Greek taverna scene. Check to see if there is a service charge and a cover charge. If no service charge, move on to tipping. When tipping at a restaurant, only tip on good service, and no more than 10%. The price of your meals are inflated since the wait staff receive a portion of your check. Every meal will have a cover charge. This covers the water and bread you receive to start the meal. You pay this if you eat the bread and drink the water or not. Don't argue, you will just look like an ass. Don't order dessert unless there is something incredible on the menu. After every meal you will receive either fresh watermelon or other small dessert, as well as a jug of Ouzo. Remember to ask for your bill. If you don't, it will never come. Plan for an hour to eat any meal, even if it is only one course.  Don't tip your taxi driver unless he/she was SUPER helpful, they don't expect a tip. Everywhere you go you will see dogs sleeping on the sidewalk. They range from indifferent to friendly. Their job is to chase away the pigeons. Don't be alarmed. 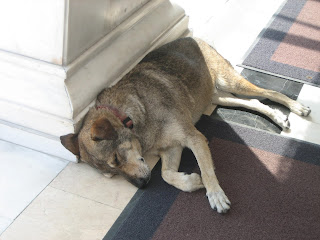 Well, now that we have that out of the way, let's get to some food. Greece is famous for its Tavernas. They are very similar to French cafes, small enclosed space with large open air seating. Most menus in Athens are very similar, focusing on fresh local ingredients prepared in traditional ways. There were some standouts though.
Stay in the Parakala (Old City) for the best food and views. For a slightly more upscale dinner, I suggest a place called Daphne's. Since it is located on the pedestrian street of Lysikratous, a cab will drop you about a block from the restaurant. Situated in a beautiful courtyard, this upscale take on classic Greek cuisine is a favorite of everyone from Bill Clinton to Bill Cosby. The girl and I split a wonderful dish of scallops in an orange sauce. For the main course, she went with the grilled chicken breast. This turned out to be two breasts from the chicken version of Pamela Anderson, and could have easily fed a family of four.  The chicken was excellently seasoned and served with a delightful array of vegetables. I went with the stewed rabbit, fork tender and not the least bit gamey. Here we broke our no dessert rule, with a modern rice pudding for me and the chocolate mousse gateau for her. While mine was excellent, I am pretty sure The Girl was ready to marry hers. Next time we are in Athens, we are defiantly getting dessert from Daphne's 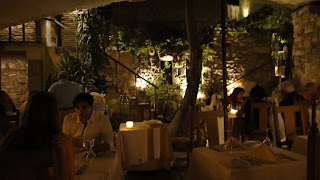 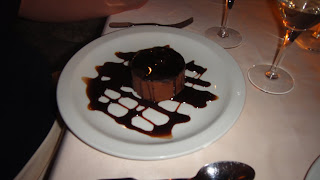 Our favorite place to eat, and we dined there twice, is around the corner from Daphne's at a traditional taverna named Plakiotissa. Between our two visits I had appetizers of grilled sausages which were like a mild chorizo and absolutely brilliant and baked butter beans in a tomato broth that were addictive. For entrees I had moussaka, which is an eggplant based sheppard's pie to me. Wonderfully seasoned and not in the least bit greasy. My other entree was far and away the best grilled octopus I have ever tasted. They say the only preparation is to boil it before grilling, but I have never had such tender octopus. The Girl went with the stewed meatballs, which would put any Italian mother to shame. 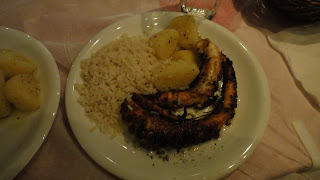 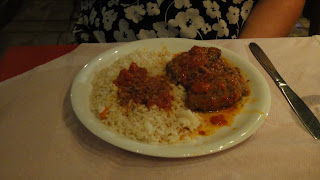 In between all the eating, don't forget to take some trips to see the sights. While I normally don't do the group tours, having a knowledgeable guide to help you through this city with several thousand years of interesting history doesn't hurt. The Acropolis is a must, of course. A day trip to the home of the Oracle of Delphi is also worth the time. Just remember, most of the great sites are on the side of a steep mountain, all the paths are paved in worn smooth marble, and Greece has no concept of suing for negligence so there are no guard rails anywhere. 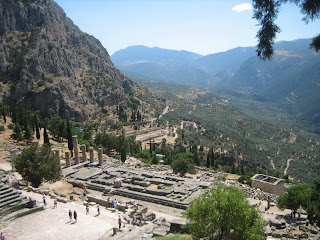 Well, ancient temples are great, The Girl needs some beach time. Lets take the ferry to Crete! Eight hours on a very comfortable huge boat, with a pretty nice restaurant. Not a bad way to travel. My advice is to do the ferry once, then fly for any further island hopping. 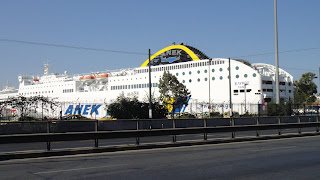 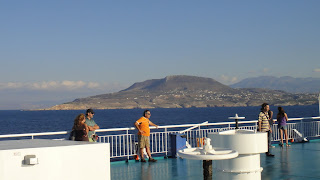 So for Crete we wanted the beach, but close to the 12th century Venetian port of Chania. We ended up at the Galini Sea View Hotel, in Agia Marina. While the hotel is beautiful, and the beaches wonderful, Agia Marina bears a striking resemblance to Myrtle Beach. Instead of the endless Rednecks, though, you end up with Nordic families with the men competing for the smallest speedo. What should have been a resort hotel instead rang with the Hokey Pokey in Sweedish. All the restaurants in the area have the exact same menu, which isn't a bad thing, and they face out onto the beach, which is wonderful. The waters of the Aegean in this area is crystal clear. My advice is to stay in Chania itself, and take a cab to the beach. 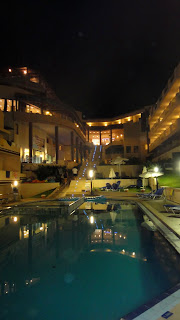 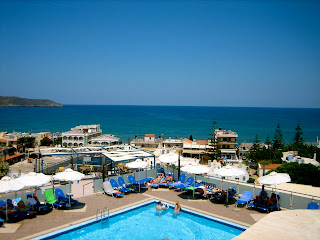 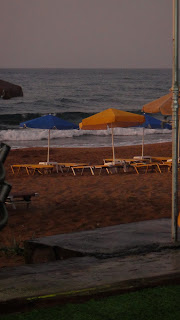 Chania, the old Venetian port city, is simply stunning. Buildings range in in age from 300 to 900 years old. The port has a 15th century mosque, a 13th century Venetian port, and a beautiful lighthouse. Shopping in town is wonderful, but don't forget to negotiate. If you pay sticker price, you're a sucker. The nightlife in this city is also lively. Midnight on a Sunday will find the port-facing restaurants packed to the walls and street performers everywhere.  Chania, like most of Crete, sees very few American tourists, but most people speak at least some English.

The Taverna I recommend in Chania is Apostolis, located on the inner harbor next to the Porto de Colombo Hotel. I recommend this spot not only for its food, but because the manager is actually from Queens. The food, though, is wonderful. The Girl chose the shrimps, which were fully incased head on tiny lobsters, with a beautiful grilled flavor. I opted for the grilled swordfish, which was seasoned in the typical Greek understated style. Letting this fish speak for itself is a great idea. Sip some Ouzo and enjoy the nightlife. 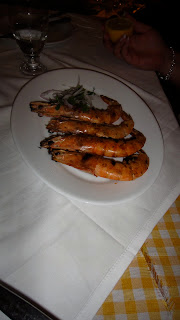 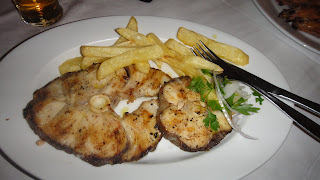 After a week in Greece, we had to head home. This will not be our last time in this land of myth and majesty. Athens and Chania combine the cafe scene of Paris with the Historical legacy of Rome, roll it together, and serve it with a laid back shrug and a jug of Ouzo. The warm climate, beautiful beaches, fresh food, and friendly faces are sure to charm you and make you wonder why you would ever want to return to the real word. Now if only the property listings would tell me what a square meter was.

Posted by foodmancing at 12:02 PM No comments: Links to this post