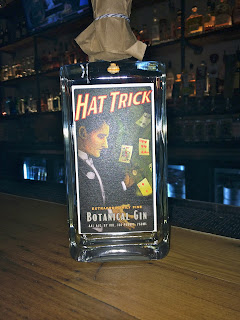 Charleston is a city that loves to drink. We aren't New Orleans drunk, but the liquor does flow fast, and our mixologists (which apparently does not translate to bartender with an ironic mustache) combine regional ingredients in unique ways to form inspired cocktails. Recently they have been able to up the "local" ante by using liquors birthed right here in the Holy City.

High Wire Distilling Co, who brought the production of craft liquors to Downtown Charleston back in September, launched their new Hat Trick Botanical Gin last night. To introduce their newest offering they chose one of Charleston's hottest new bars, The Warehouse. 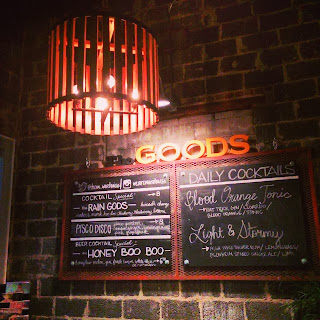 Hat Trick does something amazing; it makes you love juniper.  This isn't a gin that tastes like one of those Christmas Tree air fresheners, nor is it the vodka-like tasteless gin of some major label offerings. Hat Trick takes the light rosemary and citrus essence of high quality juniper and accentuates it without overplaying the pine flavor. The result is a gin best served over the rocks with a twist. A proper martini will also benefit from the lightly herbal and subtle flavors. 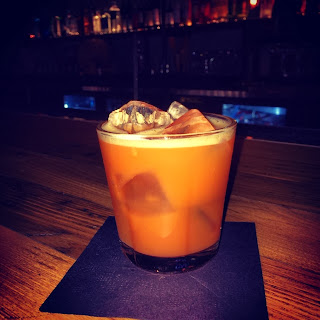 The Blood Orange Tonic, the night's signature gin cocktail, was tasty but slightly overwhelmed the beautiful gin. The second cocktail of the night, the Light & Stormy (featuring High Wire's Light Rum) was much more of a success, highlighting the rum's unusual and extremely satisfying blue agave notes. Think of an ultra-high end tequila in flavor, but not abandoning the core flavor that makes a light rum so dang tasty. This is a rum that will cure you of the Bacardi blues. 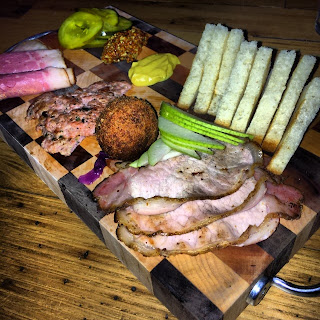 While I was imbibing copious amounts of premium gin, I decided to sample a board of the rotating house-made charcuterie ($14). Tonight's offerings were (from left to right) smoked brisket, apple and fennel sausage, crispy pork rillete, and Canadian ham. While the rillete was the clear and crispy winner, all the offerings were tasty and just salty enough to satisfy.


The Hat Trick Gin (along with the fantastic Rum and a Vodka I have yet to try) are all for sale at the distillery, coming soon to liquor stores, and by the glass at the Warehouse. 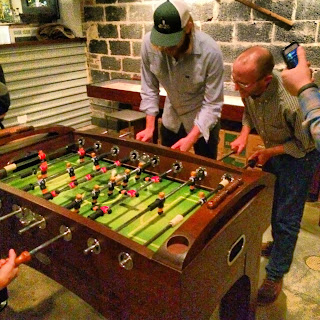 And after a glass or two try your hand at the bloodsport known as foosball.
Posted by foodmancing at 11:16 PM No comments: Links to this post