WARNING: THE FOLLOWING BLOG POST IS FOR A 20 COURSE MEAL. IT MIGHT BE A TAD LONG!!!!
I'm walking around in a daze. I'm shell-shocked. My world has been broken apart and put back together in a form I don't recognize. I think I have Stockholm Syndrome.  What does hostage psychology have to do with food? When your Chef is a culinary terrorist, everything.
Moto is the brainchild of Chicago mad scientist Homaro Cantu. With gadgets ranging from a sonic drill that can cut through granite, to a large capacity centrifuge, dinning at Moto is equal parts science experiment and practical joke. Chef Cantu takes his food engineering seriously, at the same time thumbing his nose at all the conventions we have come to expect. The best thing is, he let's you in on the joke as well.
Moto is located in an old industrial warehouse, across from the Latino meat market. Nondescript exterior hides a modern if minimalistic interior. The atmosphere is swanky and romantic. By the end of the dinner, however, you will be best friends with your neighbors. The shear absurdity of what you are to eat tonight needs to be discussed, right then. Oh, and you'll have plenty of time. The 20 course Grand Tour takes 4 hours. The service is fluid, with at least a half dozen servers with earpieces swapping out duties. The table is simply adorned with a single yellow candle. Bring on the 20 courses! 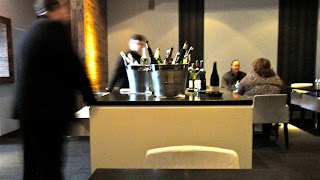 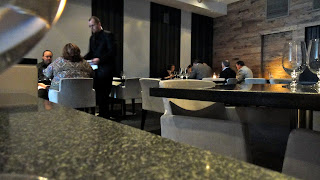 The 20 courses to come all have a deft hand, creativity, and whimsy. Only small missteps exist, and the overall effect of many of the dishes are indescribable. So here I go to describe them:
The Menu: 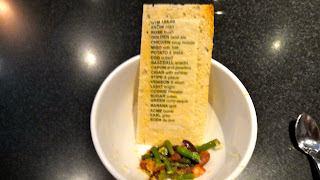 Edible menu? Why not? A baked Ciabatta bread menu has the standard menu ($135) and the Grand Tour ($195) printed out for your eating enjoyment. Served with a nicoise salad. Nothing adventurous, and frankly half way through the menu the novelty has worn off. At the same time, you are eating your menu!
1st course- SNOWman: 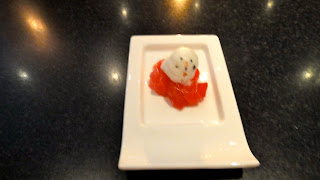 Lemon foam snowman, with Himalayan salt face and buttons. Beneath is ahi tuna. The foam is light and refreshing, and the tuna is top grade. Tuna tartare to the next level.
2nd Course- ROSEbush: 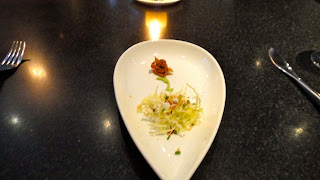 A beautiful dish, but also the least successful. The goat cheese salad with the champagne vinaigrette was nice enough, but not exciting. The rose itself is a dehydrated beet. In all honesty it tasted like a crispy piece of beef jerky. Not the most pleasant taste or texture.
3rd Course- GOLDEN twist ale: 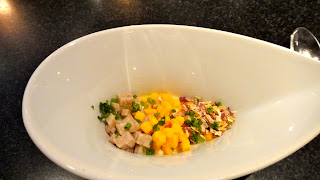 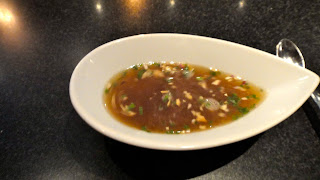 This is the Wisconsin inspired dish, a wonderful pretzel soup. In the bowl is 4 year aged cheddar, brats, and vegetables. The server also has a bottle of beer. Out comes the opener, and with a crisp snap, the bottle of soup is opened and poured into the bowl. The cheese thankfully comes right through, and the over all taste is a big cheesy pretzel. The sweetness of corn is delightful.
4th Course- CHICKEN noodle soup: 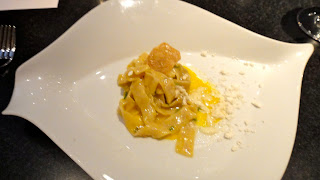 Noodles....made from Chicken powder......Genius. The mirepoix is spot on. Then you try the crispy chicken skin....and then words desert you. Genius
5th Course-MISO soup 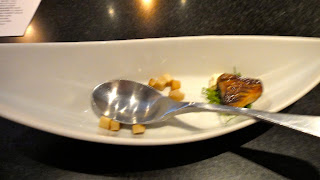 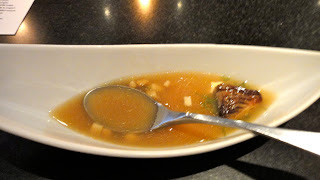 In the bowl is a perfectly seared piece of Hudson Valley foie gras. The portion is a little large and hard to cut through with a spoon, so just take the entire portion in one bite! Also in the bowl are trumpet mushroom cubes and faux foie tofu......yes, tofu made from foie gras! Then comes the miso broth. If apple cider and Iron Chef Morimotto had a love child, this would be it. The apple nose to this broth is strong, sweet, and warming. This dish would be perfect before a few salmon rolls.
6th Course- POTATO & leek: 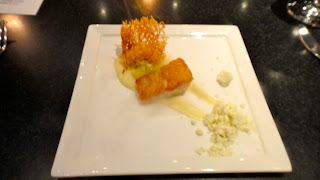 So, through the meal I have been watching a copper pot pouring steam going to the tables around me. Finally my turn to find out what was in the pot. Placed before me was a deconstructed hot vishyssoise with trigger fish and a potato leek puree. The cold element came from the liquid nitrogen frozen cream that was spewing smoke from the pot. Every bite tickles the nose and sends puffs of smoke flying about like a pissed off dragon. I can't help but giggle. I feel 5.
7th Course- EGG cubed 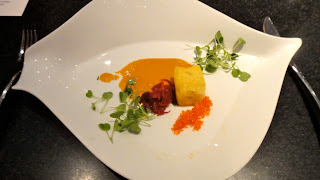 That cubed egg in front of you? That is an egg yolk ciabatta bread. With it is a tomato sauce, micro greens, pickled beet, and beautifully salty roe. You had me at egg yolk.
8th Course- BASEBALL snacks 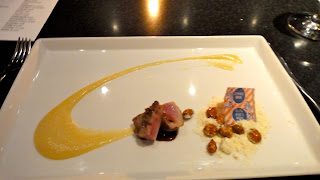 If the concession stand at Wrigley Field was run by Dr. Evil, this would be the result. A quail breast chicken nugget with Coca-Cola drizzle, candy apple puree, powdered popcorn, candied peanuts, and an edible Cracker Jack label that tastes like cherries. If you could see the smile on my face while I write this, you would know how great this dish is. Equally great is the story behind the quail. Organic and natural is the name of the game at this farm, raising some of the best quail in the nation. Unfortunately a bug entered the prize-winning stock. Instead of treating with chemicals, the owner stuck to his principles and burnt the entire ranch to the ground. Three years later, he's back to the best organic quail you can find.
9th Course- CAPON & cornbread 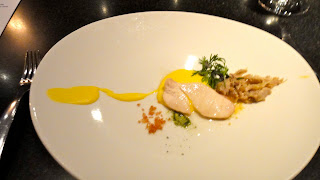 This may be my favorite dish. A sous vide rooster breast and pulled rooster leg, served with a cornbread puree and a trio of powders; bacon, jalapeno, and coleslaw. Looking at my plate, the server had a puzzled look on his face. "Does that look dry to you?" he asks. Before I can answer, he pulls the saucer from under the candle, puts it on top to snuff the flame. He then pours the wax all over my chicken. That candle that had been merrily flickering for 8 courses was a basil emulsion. The capon was juicy and cooked dead on. The cornbread puree.....tasted like cornbread. The entire dish screams Deep South.
10th Course- CUBAN cigar 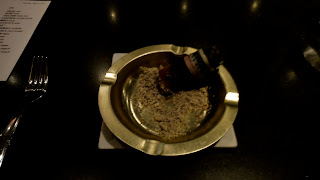 This is bizarre. In an ash tray in front of me is a cigar, with ashes. The ashes are powdered black and white sesame seeds. The "cigar" is pork shoulder with pickle and mustard, in a crisp bread, wrapped in a collard green. The flame at the end was a red pepper coulis. This dish is wonderful. A play on words, a visual trick, and a damn good Cuban sandwich.
11th Course- NUAC man 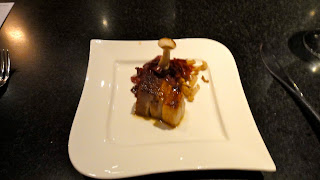 Here we get a straightforward dish - a Vietnamese style pork belly with mushrooms. The pork was beautiful, though slightly dry. The large mushroom sticking up from the rest is different, though. Here we have a mytaki mushroom that has been roasted, pureed, turned into a foam, dehydrated, formed, and re-fired into a mushroom. A 36 hour process to turn a mushroom into a mushroom. The technique is fun, but in this case it might be a little over the top. Overall, this dish is a slight miss for me.
12th Course- ALLEY-yum 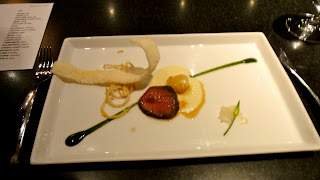 Allium is the family of the onion, and on this plate you get a whole lotta onion. In the center is a slice of venison that serves as the vehicle to deliver a cocktail style onion, shallot puree, ramp blossom over pickled onion, a green ramp puree, onion crisp, and fried onions. The venison and shallot puree meld well together. The large onion crisp was at first a little bland, but it really grew on me. My favorite part? The ramp blossom. My first ramp blossom, and it was delicious.
13th Course- LIGHT bright: 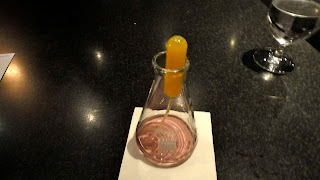 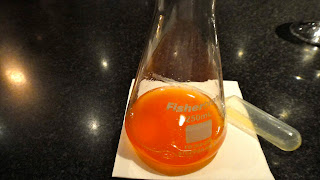 So, here comes the palate cleanser. In a beaker is a purple liquid and a pipet full of OJ. Squeeze it out, swirl it, and you have an orange dreamsicle. Again, I smile.
14th Course- CINNAMON toast: 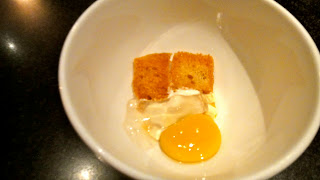 This is breakfast in a bowl. Little cinnamon toast squares over which they dump a raw egg. Seriously, a raw egg. This is Moto, though, so nothing is as it seems. That egg is a coconut and mango egg. This is yet another fun dish.
15th Course- RHUBRB & yogurt 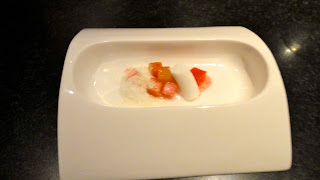 This is a plate of raw rhubarb with nitro-frozen yogurt. The taste of raw rhubarb is probably one of my top five desert flavors, and this does not let me down. Another home run!
16th Course- GREEN CURY-esque 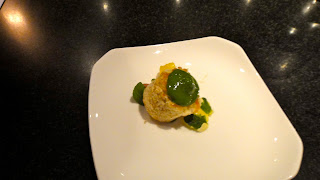 I honestly think this should have been the last course. I don't mean stop at 16. I mean this should have been served last. It is a black cardamom cake, mint ice cream, a chocolate gelle, and pineapple. Cardamom is such a wonderful flavor, and the mint was so fresh and cleansing. So amazing.
17th Course- BANANA split 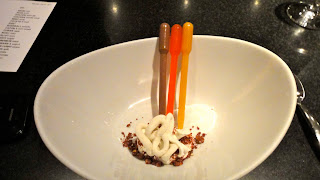 This is a sundae, ramen noodle style. A noodle of ice cream with pipets of banana, strawberry, and chocolate. Allow your inner Jackson Pollock to come to the surface.
18th Course- ACME bomb 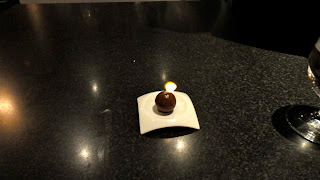 Remember the old Looney Tunes? At some point the poor Coyote would be left holding a little black Acme bomb with the fuse burning down. Here is your chance to experience it, in s'more form. Allow the marshmellow wick to burn down before throwing it into your mouth for a chocolate explosion!  Literally!
19th Course- COOKIE crumble 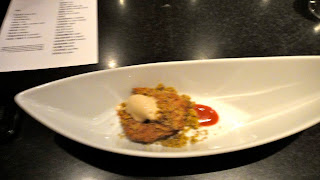 My least favorite dessert. A freeze dried cookie crumble with ice cream and a sauce. To be honest, just not my cup of tea. A well made dessert, just not for me
20th Course- SODA de jour 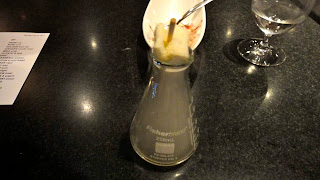 To clean your palate at the end of the meal we have a beaker of mad scientist soda, with an edible packing peanut. Drop it in, swirl, and chug.
Normally, this is where the dinner ends. Not today. Chef Cantu was kind enough to take me on a tour of the restaurant, the lab, the kitchen, and show off his new system of expediting and running the entire operation. The toys he plays with are cutting edge. The kitchen is organized chaos. The best part, and probably the thing Chef Cantu will be most remembered for, is a new intergrated system for running the entire operation. Unfortunately, I can not tell you too much about it, but I promise you will be seeing everyone using it soon. 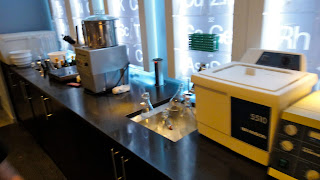 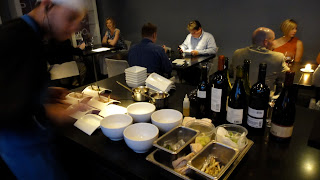 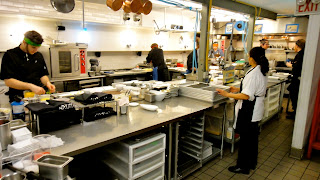 Sitting in my hotel room after the meal, I found it hard to put into words what I had just experienced. The skill, the whimsy, the flavors, the complete and utter dedication to redefining what food can be. I thought long and hard about the title to this piece, and I decided on Jihad for a reason. Homaro Cantu is waging a war against the holy beliefs of traditional cooking. An Iconoclast in every sense of the word, Chef Cantu delights in the destruction of convention, the upheaval of radical change. He may be one man fighting the world, but the world will hear him. I just hope they get the joke.

Posted by foodmancing at 11:32 PM No comments: Links to this post