The Girl and I got married August 5th, 2011. The chef who provided our fantastic spread, Nico Romo of Fish. When I found out the Guerrilla Cuisine Valentine's Day dinner would be with the guy who wowed our wedding guests, it was a no brainer. This is the youngest Master Chef of France in the US, which means he is a pretty big deal. The Girl and I were in. Didn't hurt that wine was included. 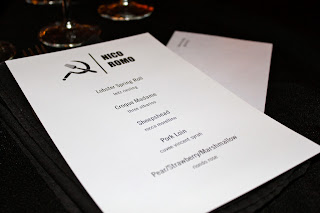 The menu: turns out sheepshead meant fish, not a sheep's head

For those of you unfamiliar with Guerrilla Cuisine's underground supper club, check out our first (of three and counting) dinner with them and Jeremy Holst. This dinner was held in the historic William Aiken House, one of Charleston's most beautiful properties. One thing we love about these dinners is the unique venues. Added into the mix was the Jazz awesomeness that is the Joe Clark Trio, Charleston's best mood setter. 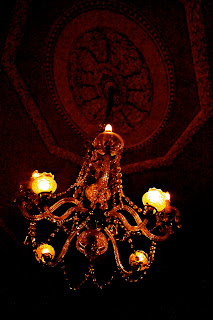 First course, Lobster Spring Roll was a fantastic...well, lobster spring roll. Paired with it was a nicely spiced curry bisque that had enough heat to please me but mild enough that The Girl wasn't blown away. 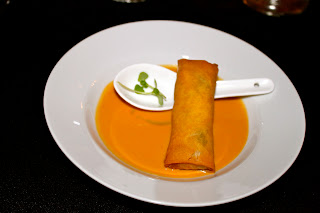 Crispy, sweet, and a touch of heat.

Second course was a take on a croque madame, with a coconut bread and perfectly cooked duck. Now, The Girl doesn't care for duck, and she still wouldn't order this on her own, but she did like the taste and the fact it wasn't greasy. For me, the truffle oil that finished the plate was slightly overpowering, but in a good way. I wish I could tell you about the wine, but our new friend iSaw EddieVedder, distracted me with a bottle of Allagash he brought. 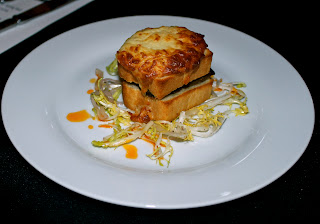 So not what I remember having in Paris as a poor student.

Third course was a pancetta-wrapped North Carolina sheepshead, with lentils, haricot verts, and sous vide squash. I found the squash a little underdone, but still tasty. The lentils were great, and the haricot verts were cooked perfectly. The fish itself was a split decision for The Girl and I. She's not a great lover of fish, and if not for the pancetta she probably wouldn't have finished the fish. I enjoyed it, though I wasn't overwhelmed and thought it the least successful dish of the night. 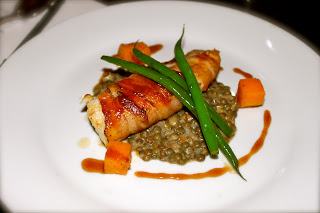 Sometimes the wrapping paper is the best part of the present.

The main course was a duo of of pork loin and beef with a demi-glaze, parsnip puree, and vegetables. The pork was tasty as hell, but we both would have liked a little pink in our pork. The beef was delicious, and the parsnip puree was fun and inviting. The star of the dish though, and the night, was the demi-glaze.  This is the kind of sauce you slap on your in-law's cooking to make it edible (well, not MY in-laws, of course). 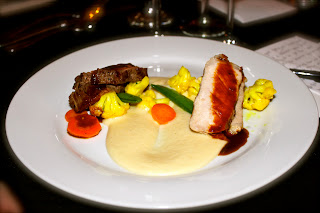 You see the sauce on that pork? Put that on gravel and I'll eat it

The dessert is a couple's affair. A build your own plate. Very yummy, but I'll let the pictures do the talking on this one. 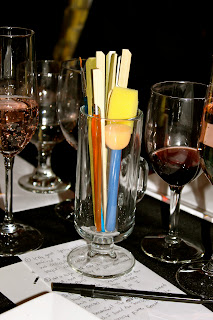 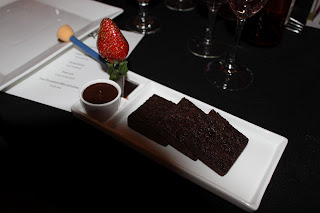 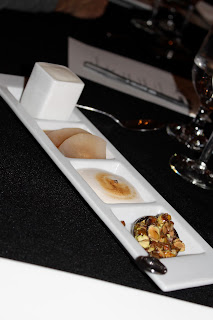 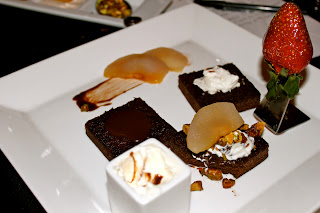 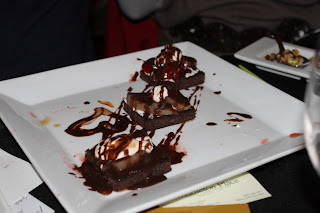 Some people decide to act like they have talent

After the dessert, came a small tray with two mints. Well, they looked like mints. Unfortunatly for a couple of quick eaters, they were actually hand towels that were activated when the waiters poured hot water on them. Cotton mouth indeed. 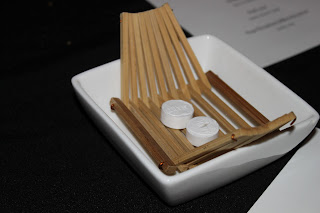 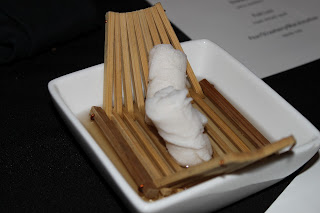 Turns into a cleansing towel, well unless you ate it.

Very good meal. There were a few flaws, and some choices I wouldn't have made, but neither of us regretted the money we spent on the evening, and that is how I decide on how successful the dinner was. Well, that and how good the end of the night kiss from The Girl is. That kiss was pretty damn solid.

(As a one-off event, I'm skipping the usual scores. Instead, I will just say GO TO A GUERRILLA CUISINE DINNER! It's time for you to be cool, too.)

Oh, you're still reading? You must want to hear about the after party. Let me just tease you. The MacIntosh, Sweatbreads, and Mexican Cake Beer. 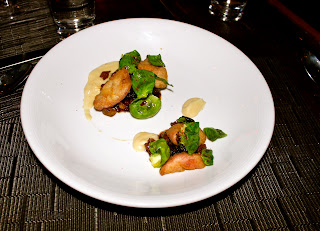 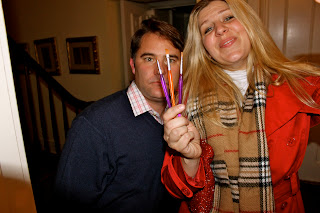 iSaw and his wife, throwing up gang signs (or making the case for more wine)
#Forkandtell #GuerillaDinner
Posted by foodmancing at 3:45 PM No comments: Links to this post

Why would someone cook bacon in water? That just sounds awful. One would think the water would leach out all the fatty goodness. Your right. Thats what makes it so good. When you pan sauté bacon in water a lot of the fat leaves the bacon and jumps in the pool. Then the water boils off. That leaves you bacon cooking in bacon fat. Now we are talking

There are two other reasons to use this technique. First, it frees you from the sauté pan. The majority of the cooking happens through the boiling of the water, so you can focus your attention elsewhere. There will be an audible announcement to let you know you need to start watching. The final reason is even cooking. This is most true for thick cut bacon, but even for your Oscar Meyer thin cut you will see a difference. The water cooking allows for a full cooking without browning, so no burnt outside and chewy inside. Here are the steps: 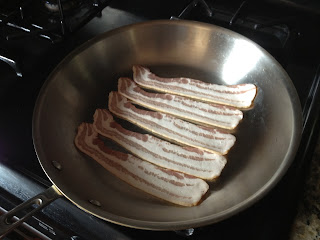 First Place your bacon in a sauté pan. 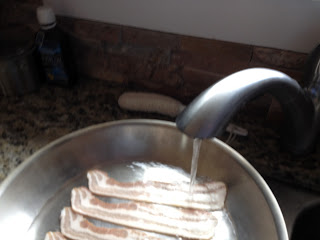 Next, fill the pan with water till bacon is covered. 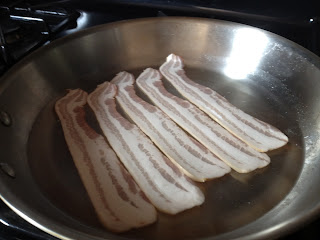 Place the pan on the burner, crank up to high, and let it boil. 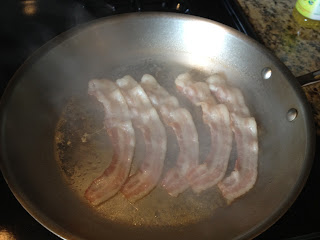 When the water is just about boiled off, it will begin to snap and hiss at you. Reduce to medium, and cook till the bacon is brown and crispy. This shouldn't be more than a minute or two. 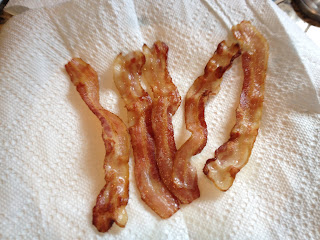 End result: perfectly crispy, super tasty, and light not greasy bacon. Give it a shot and let me know how it turns out for you!
Posted by foodmancing at 1:08 PM 74 comments: Links to this post

Beets are a love affair for me. I love them roasted with goat cheese, raw shaved into a slaw, stewed with onion and beef. The grand daddy of them all, though, is pickled. For my lady friends Que Syrah Syrah (The wine girl), Flashdance (The blogger),  and Golightly (The Deal Maven) I whipped up a batch that has a little bitter, a little sweet, and a little heat. The overall effect is almost like a hot-cinnamon flavor (mild) that is a fun play on the classic.


The next recipe I want to share with you is for Mayonnaise. Mayo? Really? That's what I want to talk about? Yes. The craptastic bread-spread you buy in plastic jars at the Pig is, in addition to being harsh on the tongue, is also awful for you. Flip over to the ingredients and you see sugar, vinegar, preservatives, and stabilizers. It isn't hard to understand the odd consistency. The homemade stuff, the REAL DEAL, is not only so tasty you can eat it by the spoonful, but....well, you don't need any buts, it's just good.