Tonight's Episode: The Most Interesting Appetizer in Scotland


My mother was from Scotland, born and raised. This gave me an insider's knowledge of the two main culinary achievements from the land of William Wallace and the Loch Ness Monster: batter and fry it or shove it in a sheep gut and boil it. The former being such delicacies as deep fried Mars bars, deep fried pizza, and deep fried kababs (all real things). The later is, of course, the dreaded haggis.

If you are somehow unaware of haggis, it is a savory pudding (fairly close to a sausage) that starts with sheep heart, lung, and liver. These are then minced with oatmeal, suet, and spices, loaded into a sheep stomach, boiled, sliced, then fried. If you are now wondering why this is even a thing, I refer you to Charlie from So I Married an Axe Murderer: "Most Scottish cuisine is based on a dare."

I'm actually a defender of haggis, the national dish of Scotland, and it is having something of a moment. It is rare to find a high end restaurant in Scotland that doesn't have an artisan farm-to-table haggis on the menu. This brings us to the single most interesting appetizer in all of Scotland, the Haggis Italiano from La Vita Pizzeria, Glasgow. 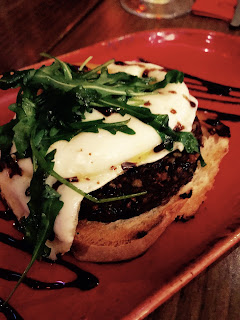 The base is a perfectly toasted crostini of homemade Italian bread. The haggis is then perfectly grilled, topped with an over easy fried egg, peppery arugula, and an aged balsamic drizzle. The richness of the egg gives a much needed moisture to the haggis, the crostini adds great texture, the arugula's peppery bite and freshness cuts through the heaviness, and the sweet balsamic mutes the minerality of the pudding.

I'm not sure what madman decided a marriage between Italian flavors and.....haggis....would work, but boy does it ever work. This isn't the only dish at La Vita that plays with Scottish-Italian fusion. There is a haggis carbonara, a black pudding linguine, even a black pudding pizza! But it is this simple, perfect little appetizer that not only sets the mood for the menu but shows you that haggis isn't only for a lost dare. 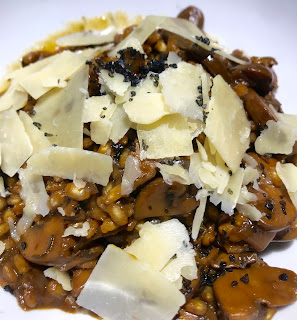 Some days you just want a decadent, luscious risotto. You can either put on pants and head to that fancy Italian restaurant and spend $30 on a plate, or you could make it yourself and wonder why the rice is still more crunchy than al dente. But wait. What if there was one simple (and incredibly cheap) substitution you could make to ensure you can have a luxurious risotto without the temperamental rice? Well, I guess since you read the title of the recipe you already know the answer is dried barley. It is far more forgiving than rice, you don't need to hit that perfect sweet spot of doneness. If you walk away and it dries up, just add more stock. So invest that $1 in a bag of barley, and treat yourself to an umptious bowl of happiness.

STEPS:
1.) In a deep-sided, large pan melt the butter on medium low heat. In a separate sauce pan bring the stock to a simmer and keep on low. 2.) Add the onion, mushrooms, and garlic to the butter pan and cook until soft, 5-8 minutes. 3.) Stir in sage and barley. Cook for one minute.
4.) Add wine, stir. 5.) Add one cup of stock, and simmer until liquid is absorbed. 6.) Continue adding stock 1/4 cup at a time, allowing each amount of liquid to absorb before adding more, stirring occasionally. 6.) Continue until all the stock is used and barley is done cooking, 30-35 minutes.
7.) Top with fresh shaved parmesan and black sea salt, if desired.

OPTIONAL:
Some of my favorite meat options to top this risotto include:


Posted by foodmancing at 9:50 PM No comments: Links to this post