There is a day every boy dreams of. He spends years wondering about it and what joys it will bring. He and his friends put their heads together and share ideas and visions of just what their day will be like. Before you know it, that day has arrived. The Bachelor party. Okay, wait....that's a Girl and her wedding. We just assume bachelor parties are exactly like the Hangover.
What to do for such a momentous and all important event? Well, it is summer, I'm a sports fan, and I love to eat. Baseball road trip to DC and New York? Sounds like a plan to me. The best man Hairless Carey, his twin brother Inches Davis, and your's truly load up the Range Rover and head on out bright and early on a stormy Friday morning, Red Bull pulsing through my veins, and the iPod set to Road Trip.
First stop finds us in Washington, DC. The Nationals vs the Rockies. All 12 Nationals fans pour into the beautiful stadium. MEAT, who we met up with in DC after he took the bus down from Philly (I'm as surprised as you that I have friends in Philly), directed me straight to Ben's Chili Bowl. Obviously as a stadium concession stand it is not as wonderful as the home location, which means Ben's might be one of the best eats in America. I had the Half Smoke pork and beef sausage with onions and cheese, drowned in enough of Ben's chili to fill Lake Tahoe. The natural casing on the half-smoke has a wonderful, crisp snap and the smoky taste is to die for. The chili, oh the chili. Just enough heat to get your lips smacking, with deep rich meaty texture.
Luckily I had my second Half Smoke polished off before the sickly funny moment of the night. Nationals pitcher John Lannan delivers a pitch that is lined right back into his face. The entire stadium goes dead silent. MEAT, at the top of his lungs, yells "IN YOUR FACE, LANNAN!" Have I mentioned he lives in Philly?
Our next stop that evening is at Bilbo Baggins Global Restaurant, Old Town Alexandria. This is strictly a Beer stop, as Bilbo Baggins is famed for its 150 microbrews. It is actually a pretty neat little joint, with a very laid back vibe. I start off with the Unterl, a dark amber Bavarian beer with a strong fruity back. The intense yeast make this 4.8% beer feel like it has a higher alcohol content. Next stop was Founder's Old Curmudgeon Ale. At 10% ABV, this is a much stronger beer, brewed with molasses and enough barley malt to knock an elephant flat on his tuchus. There was a third beer, I'm pretty sure, but after being up for 20 hours and the 10% alcohol in the second beer I don't remember anything about it.
5 am comes around way too fast after that Old Curmudgeon Ale. Coffee is my friend. We jump in the Range Rover and head to New York City. First stop in town? Yankee Stadium.
While MEAT has knocked off all but three stadiums (none of which were built when he had his epic summer), the rest of us have been to far fewer. I went to the old Yankee Stadium, the dingy and dirty House that Ruth Built. This stadium is on another level. Majestic is the first word that comes to mind. Soaring. Epic. Overwhelming. Too much. While the sausage I had was good, the more important part of this game was that we were in the stands to see Derek Jeter's 3000th hit. The entire stadium erupted in jubilation unlike anything I have seen! Everywhere you looked there were people screaming and crying and hugging. I may be a Red Sox fan, but I am so thankful I was there for this.
Time for the night out! For dinner we head to the Habana Room in Midtown. This fun little upscale Cuban restaurant is now one of my favorite spots. The service was great, the food was stunning, and the mojitos were perfect. First thing to hit your table is a plate of plantain chips with a black bean spread. The chips were fried perfectly crisp, and the saltiness of the spread is a perfect contrast to the chip's sweetness. For my drink I went with several Classic Mojitos ($9), made with muddled lime, Santa Teresa Rum, sugarcane, and mint. Each progressive drink was better than the last. For an app, I choose the Ceviche ($12) with shrimp, cilantro, avocado, red onions, citrus & roasted tomato salsa. The fresh clean taste is a revelation. I honestly could eat this dish at any time of day, any day, any season. Perfectly balanced flavor. For the entree I went with the Churrasco ($25) which is a grilled skirt steak with black beans and rice and a tomato salad. The tomato salad is a great side dish, though the black beans and rice were a little dry. The steak itself was seasoned with a confident hand, and seared exactly the way you would hope this beautiful piece of meat would be. This is a first class steak, and well worth your time. The guys all enjoyed theirs as well, from white bean and manchengo cheese salads, to spice rubbed salmon. I highly recommend you give Habana Room a shot. 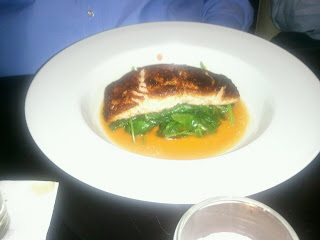 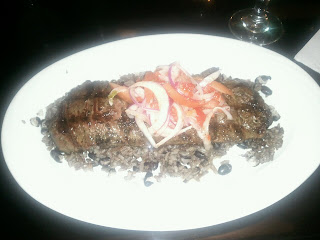 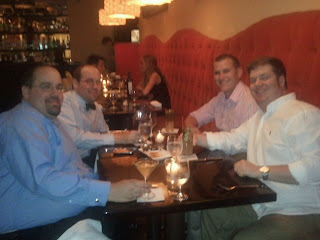 Time for MORE DRINKING!!!!! We head out with Kevin and Inches Davis's cousin, Bobby, who takes us to his neighborhood, the West Village. First stop is Julius, a bar that has been in operation since 1867. It happens to be the oldest Gay Bar in the city. It also happens to serve one hell of a cheeseburger. I never thought I'd be at a Gay Bar during my bachelor party, but it was actually a fun little spot. Time to move on, though.
We finish the night at The Highlands, a Scottish Gastropub. The vast array of Scotches on the wall sadly go unnoticed by the hip and trendy set that fill the bar with an ever increasing level of noise. I'm sure it is a great spot, maybe just not on a Saturday night.
Sunday morning comes along too early, though I have some consolation. We are ready to leave town, but not before a stop at Katz Deli. Katz is the one restaurant I always make a stop at when in New York, and not because Meg Ryan faked an orgasm at one of the tables. It is for the beef tongue sandwich and matzo ball soup. Many people can't get past the idea of eating beef tongue, but imagine you made pastrami from filet mignon........no savor that thought.....and you have beef tongue. Buttery, beefy, and it just melts on your tongue. There is absolutely no reason why beef tongue isn't the most popular meat in America. Just remember, this is a cash only joint. 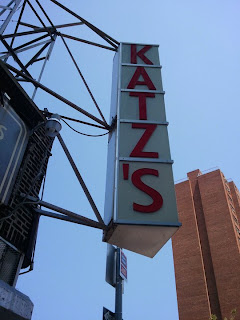 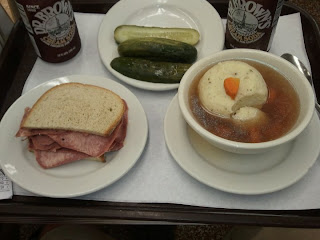 The Scores for Katz Deli
Ambiance: 2/5
Service: 3/5 (expect to have everyone be New York Friendly to you)
Food: 10/10
Value: 3/5
Overall: 18 out of 25 New York deli that delivers the real deal when it comes to sandwiches

Posted by foodmancing at 6:28 PM