Tonight's Episode: Down to the ol Five & Dime

Top Chef Master Hugh Acheson sprang to fame in 2000 when he opened 5 & 10 in Athens, Georgia. Named for the old Five & Dime that was housed in the same space, his French inspired Southern cuisine launched him to the realm of celebrity chef. On TV his affable humor, obvious intelligence, and yes the proud unibrow has made him a food TV fan favorite. The Girl and I first met him In March of 2012 when he wowed us in a paired dinner for Charleston Wine and Food Festival.

It only took us 13 years, but we finally made the drive down to Athens to try 5 & 10, in its brand new digs in an old antiques shop, and the place is IMPRESSIVE. Set among some of the more stately Fraternity houses I've ever seen (The University of Georgia apparently thought Chef Hugh's cooking is so good it moved in next door), 5 & 10 features a massive porch, a beautiful bar, several small dinning rooms, and it's own coffee bar. 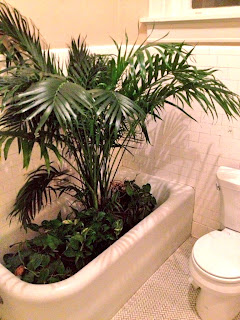 And they have palms in the bathtub

The menu is very representative of Chef Hugh's New Southern cuisine (You can even pick up a signed copy of his cookbook A New Turn in the South  after dinner).  From snacks (Boiled peanut hummus $5) to entrees (Low Country Frogmore Stew $25), the simple one-page menu is manageable and accessible. 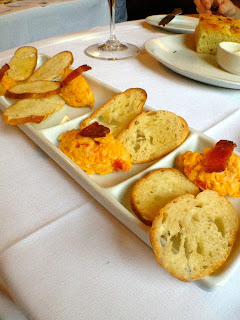 The Girl immediately goes for the Pimiento cheese with candied bacon ($6) on the snack menu. This is very close to the best she has ever had (I admit I'm not a pimiento cheese guy, and to me it just tastes fine). Perfect texture and a good but not overwhelming spiciness are what she credits for her high marks. (For her #1 Pimiento cheese check out Mrs. Betty's at Anson) 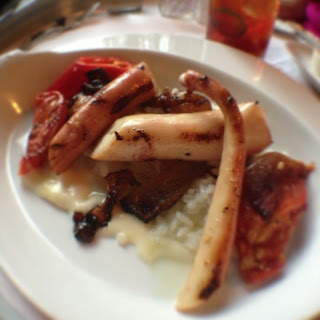 I am a sucker for grilled octopus (see what I did there? Did ya?). This version comes with sweet charred vidalia onion, roasted shishitos (very underrated pepper), Carolina gold rice, hoop house tomatoes, and a sherry vinaigrette ($15). The octopus was beautifully grilled and had an almost sausage like taste and texture, well worth the price, but frankly the dish didn't need it. That rice may have been one of the single best things I've eaten all year. I'm not joking. I would eat a four course meal of this rice with different garnishes. Words fail me. 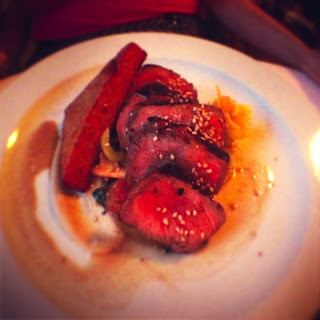 Moving on to dinner, The Girl orders a perfectly seared Painted Hills strip steak ($32) with farro panisse, foraged mushrooms, bok chou, and heirloom tomatoes. The farro, like the rice on my appetizer, really starred in the dish. The steak, spot on and tasty, could have used a touch more meat on the plate to justify the price. 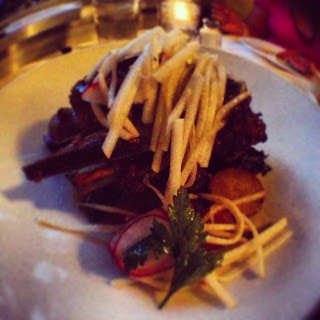 My entree did not photograph well. I apologize. I also apologize for not having it in Smell-O-Vision. The Sorghum glazed pork ribs ($29) with spiced pecans, confit potatoes, mustard greens, and a turnip & radish slaw perfumes the entire room when it enters. Slightly sweet, fragrant, porky. Each fork full lives up to the olfactory promise. Fork tender? Nah, these are soup spoon tender. I have a jar of sorghum in the pantry that now has a new use. 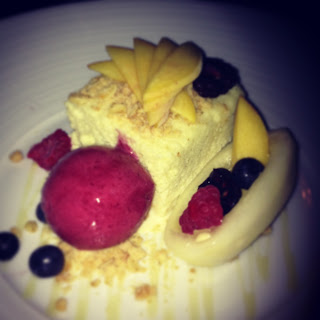 The Tres Leches cake with cherry sorbet and mixed fruit walks the fine line between sweet and too sweet, but thankfully pulls it off with aplomb. The cake's texture was beautiful and the tart of the sorbet brought a beautiful balance to the dish.

5 & 10 certainly delivers on the promise of an amazing meal. With stellar service, a beautiful space, and an attention to detail, this Athens landmark looks primed to spend another decade at the crest of the Southern food movement.

Posted by foodmancing at 9:24 PM